Unbeknownst to many, Dolly the cloned sheep had four healthy cloned sisters. (Painting by Isabella Kirkland)

Today, cloning is achieved through somatic cell nuclear transfer. In this process, the nucleus of a donor cell (a cell from the individual to be cloned) is fused with an egg cell (called an oocyte) that has had its own nucleus removed. This fusion activates the oocyte’s fertilization process and a cloned embryo begins to develop. The embryo is allowed to develop in vitro for a short time before it’s implanted into a surrogate mother where the cloned embryo is able to gestate to term.

When the donor somatic cell and oocyte are from the same species the process is termed “intraspecies cloning.” This is the typical way that domestic species are cloned. When the donor somatic cell and the oocyte are from two different species the process is known as “interspecies cloning.”  This method was used to clone the Przewalski’s foal. 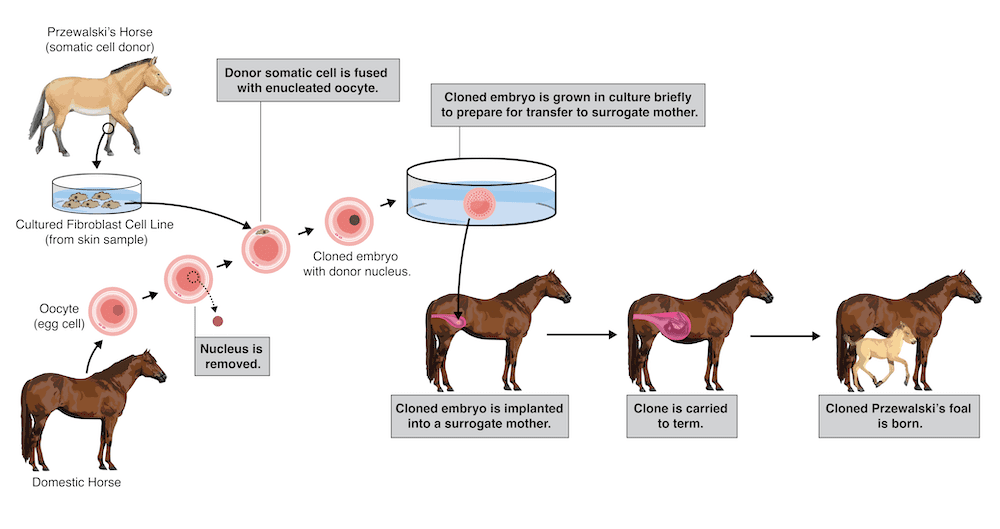 How are endangered species cloned?

To clone wild animals, including the Przewalski’s foal, researchers have primarily used interspecies cloning techniques, fusing an oocyte from a domestic animal and the cellular nucleus of an endangered animal. A domestic animal will then serve as a surrogate mother for the cloned embryo; carrying it to term and giving birth. This practice is preferred for several important reasons:

How can cloning aid endangered species?

For endangered species that have experienced severe population bottlenecks, biobanking and cloning offer a means of indefinitely conserving genetic diversity that would otherwise be lost.

When species begin to recover from bottlenecks, either in the wild or with the help of captive breeding programs, population numbers increase while genetic diversity continues to erode, due to a process known as genetic drift. Genetic drift is strongest in small, isolated populations—the conditions of rare endangered species, especially those whose recovery depends on captive breeding. Once a species has recovered in numbers, genetic drift weakens and the diversity that survived will remain, but it takes a very long time for spontaneous mutations to rebuild the same level of beneficial genetic diversity that was present before the bottleneck. Therefore, the effects of genetic drift can be felt by populations long after they appear recovered. A seemingly healthy recovered population can quickly decline due to inbreeding depression. Or the species can struggle to cope with disease or environmental changes because the population has lost the genetic variation it needs to adapt.

However, if cells are preserved from individuals early in a species’ recovery, they can be used to clone those individuals at a later time and recover lost genetic diversity. Genetic drift is a random process, which means that genetically diverse individuals cloned from the same cell lines can be introduced to a population periodically and continuously reset the standing diversity of the population. After each reintegration of the cloned cell line, genetic drift will begin eroding diversity again, but a different set of alleles will be lost at random while others will be retained. As the population size increases, the chance increases that unique alleles are retained. In this way, repetitive cloning of historic individuals over many generations can ensure the preservation of a species’ original genetic diversity.

Which endangered species have been cloned?

To date, only the cloned guar, the bucardo, and the sand cat did not survive to adulthood. The cloned banteng, coyote, wolf, white-tailed deer, mouflon, bighorn sheep, African wildcat, Northern leopard frog, Japanese pond frog, and Spanish ribbed newt have survived to adulthood. The cloned Przewalski’s horse named Kurt was born August 6th, 2020, and is alive and healthy.

As you can see, most animals that have been cloned are placental mammals, owing to the fact that mammalian embryos can be created in vitro (in a petri dish) and implanted into surrogate mothers. Domestic mice, rats, rabbits, cats, dogs, cattle, pigs, goats, sheep, and horses are routinely cloned for commercial and research purposes. Most wild species that have been cloned are related to those cloned domestic species so that these domestic species can provide compatible surrogate mothers.

What was the first animal to be cloned?

Dolly the sheep was born in 1996, and while Dolly is the world’s most famous clone, she was not the first. The world’s first cloned animals were frogs cloned in the late 1950s. Cloning via somatic cell nuclear transfer was first published in 1961 by John Gurdon. John Gurdon was awarded the Nobel Prize for Physiology and Medicine in 2012 for his ground-breaking discoveries of embryonic development through cloning frogs. Dolly was not the first cloned mammal, either. That honorific goes to a cloned sheep born in 1984 and two cloned cows were born in 1987.

Dolly became famous because of how she was cloned. Dolly was cloned from adult donor somatic cells—meaning the donor cells used to clone Dolly were from an adult sheep. Every cloned mammal before Dolly was cloned from embryonic cells. Working with embryonic cells had been easier to do, but greatly limited the versatility of cloning. The successful cloning of Dolly ushered in an era of cloning capabilities that finally made cloning an accessible and broadly useful technique in science as well as commercial agriculture.

This milestone set the stage for cloning wild species for conservation. The cloning of Dolly opened up the possibility that cells in frozen zoos, typically collected from adult animals, could one day be used for cloning.

Do cloned animals have normal lifespans?

In 2016, Dolly’s cloned sisters—Daisy, Debbie, Denise, and Diana—made headlines for celebrating their 9th birthday. For sheep, they had officially reached “old age.” These sisters had been cloned from the same donor cells as Dolly herself.  Every one of them was healthy. But Dolly had died at age 6, making many people believe that clones may not live normal lifespans. However, for healthy clones there is no evidence to suggest that cloning impacts longevity.

In general, clones live average lifespans. In fact, the world’s first mouse, cat, cow and white-tailed deer cloned from adult cells, the same process used to clone Dolly, all died of old age. In 2019, the world’s first cloned camel, Injaz, celebrated her tenth birthday. While there have been clones that died young, rarely have these deaths been linked to problems with the cloning process.

Natural fertilization, artificial insemination, in vitro fertilization, and cloning produce healthy offspring. And in the case of  inherited genetic defects or developmental problems during pregnancy, any of these processes can lead to unhealthy births. While exact statistics from natural fertilization can only be estimated, the exact numbers for artificial reproductive techniques are known. Among reproductive technologies, cloning does exhibit the highest frequency of developmental problems, but only a minority of clones are born unhealthy. The majority of clones are healthy at birth. FDA-led research on cloned cattle and sheep has also shown that non-genetic developmental abnormalities present in clones are not passed onto their offspring. The efficiency of cloning livestock and pets is so good that in several countries there are now commercial companies founded upon animal cloning as a service industry.